In the past a petrol station was all about fuel but with BP reporting half of its customers in the UK and Ireland are stopping for food not fuel and the recent introduction of electric charging stations and lockers for online pickup, it is clear consumers increasing demand for convenience is changing the sector. Adapting to the new trends, means new and existing customers will keep coming in using cash, card or mobile payments for their purchases. 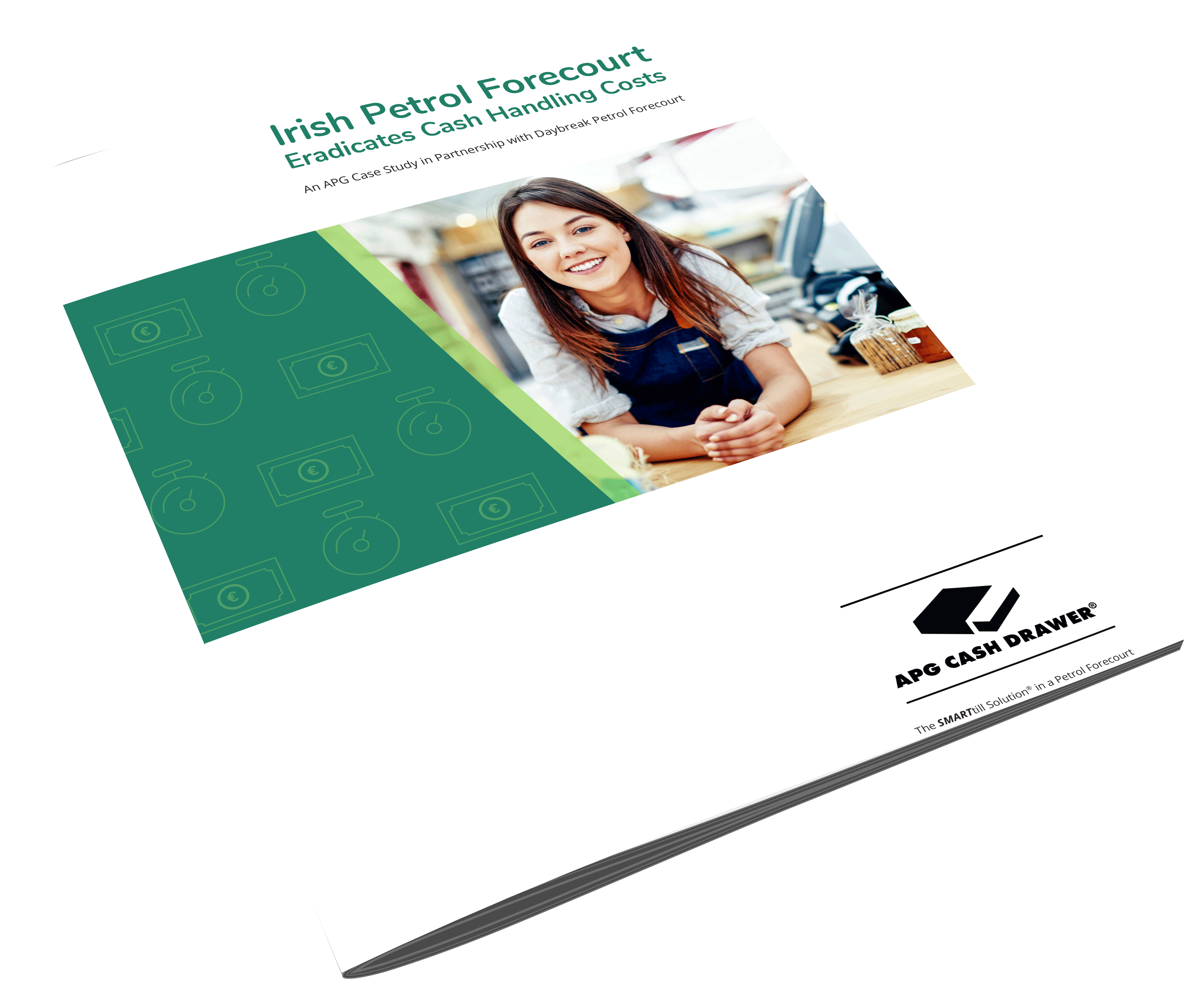 For the Daybreak petrol station and convenience store in Westmeath, Ireland, the adaptation has already begun. Because of the increase in customer volumes, Daybreak was spending too much time topping up cash drawers, completing cash counts and figuring out discrepancies, so the storeowners decided it was time to look for a cash management solution.

Daybreak’s management turned to their POS provider of 10 years, Station Master, for help. Station Master, a leading ePOS provider to convenience stores and petrol forecourts, was in the process of integrating APG Cash Drawer’s SMARTtill Intelligent Cash Drawer into its SmartPOS platform. Once they heard about the SMARTtill Technology’s capabilities, the storeowners said they’d like to deploy it as soon as possible. “We need this,” Sarah Orme a company director and day-to-day store manager, told the provider.

Daybreak is located just outside rural Delvin in county Westmeath. The store opened in 2006 and currently employs 13 people. Managing cash had become a vexing challenge. “It was difficult to pinpoint the exact time that discrepancies were made,” says Orme. “Often it would be the following day before the problem could be rectified because staff had gone home. It was time-consuming to try and find the time the error was made.”

Cash counts at the end of the day were done with a counting machine, which took up a lot of staff time, she recalls. If a counting error occurred, they would have to start over again, taking up even more time.

Having worked with Station Master for 10 years, Daybreak’s management had no doubt the provider would come up with the right solution. “We have full confidence in their advice, installation services and backup service. Every member of the staff is friendly and knowledgeable, and always prompt to rectify any technical errors that occur,” says Orme.

In business for more than 20 years, Station Master, based in Celbridge near Dublin, serves customers in all of the country’s 32 counties. The company focuses primarily on convenience stores and forecourts and integrated the SMARTtill Solution® into its POS offering in the Autumn of 2017.

“I gave the customer a demonstration of the SMARTtill Cash Management Solution, and then explained how it works and how it integrated to the POS and back office software,” says Station Master Director Patrick Keegan. “The decision to purchase the solution was immediate.”

That’s because Daybreak’s management quickly saw how the SMARTtill Technology would address pressing issues such as the store’s vulnerability to internal cash theft, as well as costs in time and money associated with managing cash floats and pinpointing incidents of theft and other discrepancies, Keegan says. “The SMARTtill Intelligent Cash Drawer offered the complete solution the customer needed.”

Tackling Cash
Shrink On the Spot

According to the 2017 survey by the European Central Bank, 58% of retailers stated that employee cash theft is the second highest cause of loss for Irish retailers. This is even more troubling when 78% of all POS transactions in the country are made with cash. It’s likely this trend will continue as 46% of Irish survey 78% of all POS transactions in Ireland are made with cash APG Cash Drawer 78% participants named cash as their preferred form of payment.

An important feature that the SMARTtill Technology enabled Station Master to introduce was a prompt at the POS that immediately alerts cashiers to a discrepancy following a cash transaction. “This encourages better cash handling and acts as a potent theft deterrent, with the objective of reducing cash loss at the POS,” continued Keegen.

Since the installation of the SMARTtill Intelligent Cash Drawers, Daybreak’s management no longer has to worry about the issues that used to cost time and money. “Discrepancies have been eliminated. We are now confident that customers’ change is correct at all times. Safe drop amounts are automatically counted and correct at all times, and till cash up time takes seconds instead of hours,” says Orme.

It took about two hours to install two SMARTtill Intelligent Cash Drawers, a process that went mostly unnoticed by customers or employees. “There was little or no inconvenience to the running of the store during the installation,” says Orme.

The SMARTtill Solution® required minimal training, Orme says. “The till prompts the user through most of the steps to complete the safe drops, till count, and other tasks,” she says.

Before the SMARTtill Solution® installation, Orme says, “it took up to 15 minutes to reconcile the shift and have a float ready for the next shift. Typically they would have four shifts in a day (two tills each having two shifts). This would have taken an hour in total. In comparison, it literally takes only a minute per shift so a total of four minutes for the day when using the SMARTtill Technology.”
Cashing up at the end of the day also involved counting all coins and cash, but now thanks to the SMARTtill Technology, it only takes seconds to total the tills at the end of the night. As a result, Daybreak has seen an overall reduction of staff hours and administration dedicated to these tasks while improving customer service in the store.

Meanwhile, Station Master is planning SMARTtill Solution® deployments for other clients, he is pleased with the APG partnership. “The high level of support we have received since deployment commenced has been impressive and reassuring.” As a result, he says, he would not hesitate to recommend the SMARTtill Solution® and APG Cash Drawer to others.

The SMARTtill Solution® has been installed in over 20 sites across petrol forecourt and symbol groups in Ireland for a number of well-known brands. You will see this technology in more and more petrol stations when you stop for a break or fill up on petrol.

Download the full case study to read how the SMARTtill Solution® can help your business.